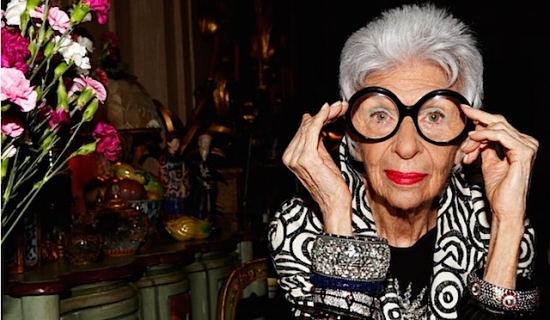 If you’re feeling anxious about getting older, take a few minutes to watch the documentary film “Iris.”  Both the legendary filmmaker Albert Maysles—who directed “Iris” at age 87—and his subject, 93-year-old Iris Apfel—retired businesswoman, former interior designer and fashion icon—embody the notion that being active, staying true to yourself and doing what you love are key to remaining vital in older age.

Born in Queens, New York, and raised during the Great Depression, Iris Apfel worked at Women’s Wear Daily and apprenticed with the designers Elinor Johnson and Robert Goodman early in her career. In 1948 she married Carl Apfel, a textile merchant, and two years later the couple launched the textile firm Old World Weavers. They spent the next forty-plus years circling the globe to source and produce fabrics for a steady stream of clients, including nine White House presidents.

In the documentary, Maysles makes enchanting use of the vintage 16mm film footage shot by Apfel’s husband Carl during their many trips abroad, blending it with present-day footage shot by the director as he tags along with Iris roaming the streets of New York in search of the next great bargain.  From Morocco to Harlem the veteran shopper pores over merchandise, haggles with merchants, and offers quick-witted asides worthy of a vaudeville entertainer.  All the while, Apfel is confidently drenched in colorful necklaces and mismatching patterns, as much a work of art as any Jasper Johns painting.

Her husband Carl is a doting sidekick in the film, egging her on in rhymes (“Make a deal, McNeil!”), delighting in Apfel’s fame.  The latter sprung forth in 2005, when the Metropolitan Museum of Art launched an exhibition titled, Rara Avis (Rare Bird): The Irreverent Iris Apfel.  The exhibit of selected items from Apfel’s personal collection, which mixes “high and low fashions—Dior haute couture with flea market finds,” is a reflection of Apfel’s singular attitude toward life: it’s all an experiment, constantly evolving, just like her spectacular outfits.

More than just a window into Iris Apfel’s influence on the world of fashion and design, “Iris” is the story of a sharp-tongued, eccentric rule breaker, and the often scene-stealing love of her life who makes her merriment go ‘round.

To rent the film on Amazon click here: Iris