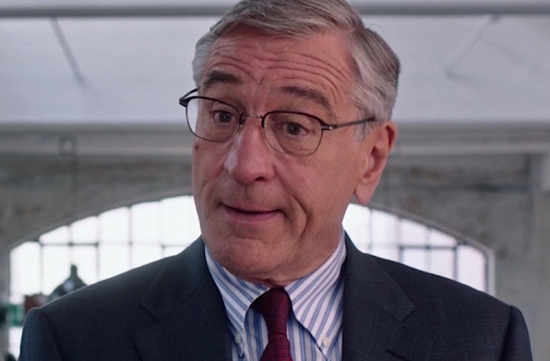 I have yet to see the new Nancy Meyers film, “The Intern,” but judging from the trailer it looks like we’re in for the senior equivalent of a gay character whose main purpose on screen is to cheer up or dress down (or both) straight characters, and help them evolve as human beings.

Witness the 24-year old assistant who (a) considers it appropriate to ask DeNiro—the 70-year-old intern—how old he is, and then (b) explain why she, herself, looks older than her age in this way:  “It’s the job.  It ages you.  Which won’t be great in your case.”

Such a nice, warm welcome.  But none of the young folks I know would ever ask a senior how old he/she is.  At least, not on the first encounter.

And then there is DeNiro’s young boss, played by Anne Hathaway.  When he enters her office in his suit and tie, she does a double-take before offering up this breezy exchange:

Young Boss:  “Don’t feel like you have to dress up.”

Senior Intern:  “I’m comfortable in a suit, if it’s okay.”

In my dreams, DeNiro reverts to his role as Travis Bickle in “Taxi Driver” and snarls back: “You talkin’ to me?”  But I guess if he said that, he’d lose his coveted internship.

How I long for the days of “Golden Girls,” when seniors didn’t stick out like sore thumbs and they had at times crazy-inducing emotions.

Maybe there’s a method to Meyers’ madness, but I’m not holding my breath for the Sept. 25 theatrical release of “The Intern.”  Instead, I think I’ll just watch the touching grown-up film, “Enough Said” one more time… or catch a marathon of “Maude.”